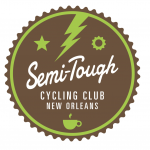 Prior to 2012, the organized cycling scene in New Orleans essentially consisted of clubs on either end of the cycling spectrum. The New Orleans Bicycle Club has been a powerhouse in competitive cycling for years, and is a club with a long and distinguished history. They were, and still are, focused almost exclusively on bicycle racing, and on providing opportunities for developing young racers. On the opposite end of the spectrum are the Crescent City Cyclists, who had established themselves since the mid-70s as a much more laid back cycling group. Their focus is on  low-key recreational touring and they lead leisurely country rides, mostly on the north shore of Lake Pontchartrain.

Having ridden with both groups somewhat extensively in the years since rediscovering my youthful love of cycling, I can say without a doubt that both are exceptionally well conceived and operated, and that I have enjoyed the opportunity to ride with them. But when I would ride with either group,  I couldn’t help but feel that I didn’t quite fit in. I wanted to ride on country roads, and I loved touring, but I also wanted to ride fast, and I wanted to challenge myself to get faster. But, when I rode with the racers, I just wasn’t tough enough. I was getting shattered;  finding myself wanting to be riding 2 or 3 mph slower, riding alone off the back, and thinking about that country road again.

It became clear to me soon enough… I really didn’t have a group to ride with.

Anyone who has ridden a bike in New Orleans for any amount of time knows that there is only so much riding you can do here alone. And so I found myself traveling; registering for grand fondos and charity rides in distant places – and finding people there like me; serious, dedicated cyclists who loved riding hard, but who weren’t aspiring Cat 1 racers. My life on the bike became a cycle of (1) desperately boring solo rides at home to stay fit, (2) the anticipatory joy of going off on a bike trip where I could ride with people like me, and (3) the inevitable crushing reality that I was home again, to ride alone  until the next trip. 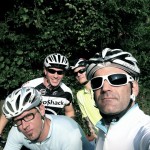 And so, harnessing the power of social media, on June 22, 2012, Semi-Tough was born, as a Facebook post announcing a group ride for a brand new cycling club. As luck would have it, the die that catalyzed the club into what it is today was cast on that very first ride.

A Facebook friend was married to a guy who had been having his own ideas about changing the New Orleans cycling community, and she encouraged him to come check out my ride. His name was Wes, he was in the process of starting a design-inspired cycling company called Rouler, and he was looking to find his place in the scene as well. That day on the bike, I realized that Wes and I were looking for the same group of people. I also became convinced that we could find those people the same way we had found each other. 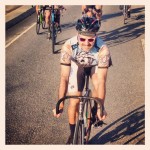 The Semi-Tough Facebook group grew quickly and steadily, and our group rides got bigger and bigger. By August, we were doing group rides  with 10+ riders. And thanks to a few critical folks coming together over the next couple of months, things were about to start happening even faster.

Late in the summer of 2012 I chased a guy on a track bike named Boedi around the lakefront on something he called the Rabid Ride. Soon we were fast friends, and a whole group of Boedi’s fixie/bike messenger friends were riding with us. A charming Brit called Matt showed up on a ride one day. He brought a certain level of class, and an encyclopedic knowledge of cycling history… and a bunch of guys he worked with who rode bikes. Our good friend Rusty trained triathletes at his gym. Some of them liked the idea of trading the aero bars and training diets for some coffee and donuts and a hard ride on a road bike every now and again. Soon we had a critical mass.

And then one fateful Saturday, late in 2012, I was out on a ride with my dear friend Bryan. We had mapped out a simple ride from uptown, out to the lake, and back.  After about 35 miles or so, Bryan suggested stopping for coffee and a snack in the Marigny. We stopped for sandwiches at the Cake Cafe and a coffee at the Orange Couch. After our break, we rode home through the French Quarter, CBD, and up Magazine Street. We had so much fun that day, we posted the  ride for the next Saturday (with a few tweaks) as a group ride. It was an instant classic – our Saturday club ride was born. 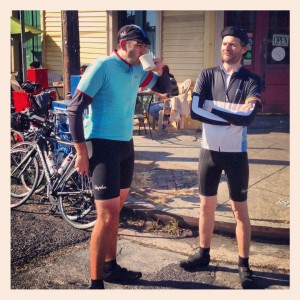 Thanks to the success what was then called the “OC Ride”, the club started finding an organic identity. It might not have been the one I’d dreamed up when I started, but it felt even better and more comfortable. More and more rides were organized and attended. The people who rode with the club began to define what the club was. Some days we were hardmen, and some days Sunday spinners. Some rides we killed intervals together, and on others we cared more about the pre-ride coffee and donuts than the training.

A year and a half later, we’ve ridden thousands of miles together. We’ve done epic all-day rides, and we done simple spins around town. We have travelled across the country, bringing our Semi-Tough spirit on the road with us wherever we go. We’ve raced together. We’ve won and lost together. We have become friends with one another, on and off the bike. In short, we have become a club. The Semi-Tough Cycling Club.