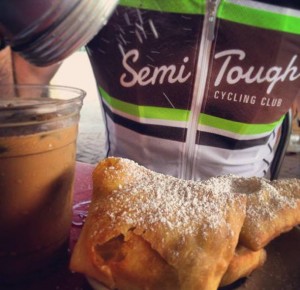 They say New Orleans isn’t a great place to ride a bike. It’s hot. The roads are flat. We are surrounded by water. There are no more than three routes out toward anything like a country road, and it’s 50 miles of riding before you get there. So yeah, it might not sound like a great place be a cyclist. But those of us who proudly call ourselves members of the Semi-Tough Cycling Club beg to differ with that assessment. You see, when the roads are the same in every direction, it’s the people you ride with that make the difference – and the Semi-Tough Cycling Club has good people for days.

From its humble beginnings in 2012 as a four-man group ride, the Semi-Tough Cycling Club has grown into one of the biggest cycling clubs in the South Louisiana area. Our attitude of openness and acceptance, and our goal of providing challenging cycling opportunities for all to enjoy, attracts cyclists of all abilities and backgrounds to the club.

Whether to participate in recreational and sporting cycling events, to enjoy the camaraderie of an organized ride, or to challenge your expectations of how much fun it can be to be a cyclist in New Orleans, we welcome anyone who enjoys and respects the sport of cycling to come join us for a cup of coffee and a bike ride. We feel certain that you’ll find just the speed, spirit and sensibility to suit your style of cycling – whatever it is. Fast like lightning. Bold like coffee. We are the Semi-Tough Cycling Club. Allez! Let’s ride.

Soundtrack to a Bike Race

Here in New Orleans we like to think life is set to music. Whether its the rattle of a streetcar, the beat of a jazz drum on Basin Street, or a marching band in a Mardi Gras parade - everything has a soundtrack. For the Semi-Tough Cycling Club, bike racing is no exception - the music matters - and we are lucky enough to count amongst our number the one and only DJ Rear Admiral Sir Cheerio. This year for our Pontchartrain Beach Summer Series, Sir Cheerio threw down on a couple very select sunset mixes. Follow him on Soundcloud for more, but here is his mix for our finale. Grab a cool beverage and a comfortable place to chill and get deep...

2018 NOLA (and nearby) Cyclocross Calendar

Join the Semi-Tough Cycling Club and Yeah You Ride! at the 2018 Harbor Master Criterium p/b Bike Law Louisiana. Register here, and in the mean time, get hyped with this video.

🚨1 month to go before the start of the @Telenet UCI CX World Cup! #TelenetUCICXWC
Who's excited?! pic.twitter.com/2wrK0ZbThr

Christopher Weiss, who was shot last week while on a club ride, found himself in the middle of another shooting Saturday morning. But this time it was cameras that were firing at him, as Chris and several other of his cycling buddies who've been forced off the bike due to injury surprised their fellow club members on Esplanade Avenue with a little support for the weekly club ride. Chris Weiss, bullet in tow, was lucky to be standing with a sign sarcastically encouraging his fellow cyclists to do their best on the bike.

This week’s ride was called the 'Bullet Proof Club Ride’, marking the club's efforts to  support Chris, and to stand against cyclist harassment and the forces that dissuade people from biking. "We are out here to show support to the club that, despite some suggestions to the contrary, will ride the traditional route that I got shot on. If I had been able, I would have been there as well, bullet in my back and all,“ said Weiss.  The tone among this group and other cycling groups in the city following last weeks shooting is one of perseverance.  As founding member of the Semi-Tough Cycling Club, Townsend Myers, said in his post on May 15, 2017  "abandon streets to your fears and stereotypes and you lose. Demand to use them without fear or stereotype and we all win.“  The riders see this no differently than any other social injustice and have called upon city officials to address the problem.

There are many obstacles for bicyclists in New Orleans and around the United States.  Other than the inherent risks of riding a bicycle and the interactions with vehicles on the roadway, for several years now it has appeared that cyclists in New Orleans have been targeted in malicious ways.  In 2014 it was baseball bat wielding thugs.  More recently, paintball attacks have been in the spotlight.  This isn't a new problem.  In 2015 the topic made the news when a cyclist in Bywater was shot with paintballs in drive by fashion from a vehicle that was all caught on a security camera.  The paintball attacks continued into 2016 and 2017.  There were the arrests of 4 people last week associated with a paintball attack on a father and his daughter, but who knows if they are the same group that engaged in the attacks on cyclists in the past.  And, of course now there is the attack on Chris, who was shot with a 0.22 caliber bullet while on a club ride in New Orleans East last week.

So far Chris and the club have seen little action from law enforcement in regard to determining the source of the bullet or the person responsible for the attack.  Each time an attack takes place there has been outrage, followed always by the inevitable die back of any momentum to solve the issue.  Local bike advocacy groups do their best to bring attention to these issues and continue to work with the city to solve these problems, but the harassment escalates. This time we hope it will be different.

So with the club's typical light-hearted approach, Chris and his friends took to the streets with signs, cowbells and cameras to keep the spotlight on the issue, and of course to humor the group as they rode down the beautiful oak-liked stretch of Esplanade Avenue that marks the proper start of the club's weekly ride through the city. One sign in particular - "NOT Riding is the New Riding“ - pokes fun at the injured rider’s frustrations with their injuries and their solidarity with those that ride. "Real Men Recouperate“ reads another sign, purposefully misspelled to represent the "coup" on the status quo.

And then, down Esplanade Avenue comes the steady stream and sound of the Semi-Tough Cycling Club riding by.  Cowbells ring out as signs are waved to the group as it rides by cheering their supporters. Just as quickly, the sound passes, the accompanying breeze dissipates, and the group rides on towards City Park.  Beyond that moment the fading cheers of appreciation from the club’s riders registers with their injured compatriots.

This community will not get knocked out.